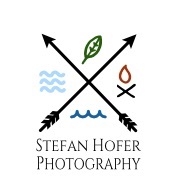 ​​There are two ways to know when Summer is over and Autumn begins. The first involves a calendar…the second is to go outside and feel the chill settle in around the land. I prefer the second method, to be in touch with nature and feel her ebb and flow, just like the natives before us and other long forgotten and extinct cultures that used seasonal changes as their time table.

Looking at the temperature forecast, the first deep cold since last Winter was arriving early this morning. The arrival of the drastic change in temperature was already causing lots of steam to rise from the water by 11 pm the night before. As I was stargazing, I knew I was going to attempt an early morning fog photograph, and since I had already been thinking of going to “The Hole in the Wall” here in Pointe Au Baril, it seemed the stars were aligning just perfect.

The next morning the alarm turned on and I sprang out of bed eager with anticipation. I put on as many clothes as possible to thwart the near freezing cold outside.  I jumped on the boat, hit the starter, turned the ignition, and the engine roared to life, obliterating the morning solitude and probably scaring the crap out of any wildlife within a half kilometer. I eased off the dock and along I went…into the foggy cold.
I drove through massive plumes of fog almost immediately and was grateful I remembered bringing my headlamp. I cut the throttle to be safe, as passing logs or debris were nearly imperceptible to my eyes. At least I didn’t need to worry about other boats…there’s not many crazy people like me driving a boat around in midnight blackness!
I quickly made my way to “Hole in the Wall” but discovered, much to my chagrin, that there was no fog there. Of all places to not have fog when everywhere else I looked was ridiculously socked in with the stuff, and I had zero, zilch, nada. I couldn’t believe it…but I still wanted to check out the narrow passage way so I parked the boat on a beach and hiked the short trail leading to the 50 ft cliff tops. As I walked around looking for compositions and interesting details, I discovered nothing that merited a shutter snap, thus I made a quick decision to leave as the seconds clicked by getting closer to sunrise. I made a hasty retreat back to the boat to search for other photo opps.

I knew of a couple scenes in the area that I previously scouted which might make for nice images with the fog, but upon landing, disembarking, and vetting the area again, I decided that those spots also did not warrant an image. My hopes began to fade…I literally had minutes to make a clutch decision otherwise I wouldn’t have an image to capture on this most glorious foggy morning.
I was out of location options and I needed one NOW! I propelled the boat through narrow waterways and swung the bow around the buoys’, almost in a frantic search for something, anything really. The first time I saw the rock I almost passed by thinking it wasn’t good enough, but luckily I was moving slowly, so I threw the engine in reverse, made a three point turn, and parked the boat on the glaciated landing of stone. Hopping up on top of the rock, I immediately saw potential. I began unloading my gear with a feverish pace because the sun was beginning to touch the tree tops.
My first step is always detaching the lashed tripod from my bag. The tripod I’ve been using for 6 years is the Manfrotto MT190CXPRO4 Carbon Fiber Tripod. It’s an amazing tripod that’s been put through every weather condition conceivable…it’s super lightweight, very rigid, durable, and dependable. But like I said, these legs are 6 years old now, and even though I maintain it pretty well with annual conditioning, they are literally beginning to fall apart. And thus begins the saga…as I was quickly pulling the first tripod leg from collapsed to fully extended, the lower leg shot off from the whole tripod leg, and I wasn’t holding the lower leg as it flew off the tripod and away from my hand, which at this point was like slow motion. I can see the replay in my head, tumbling down the rock to certain disaster. The leg bounced on the rock, rolled a little, and fell off a ledge which resulted in the most unbelievable swan dive a tripod leg could ever take. Apparently it wanted to play hide and seek because it dove right into a small crevice, falling 6 ft between the cracked rock. The slit was slightly larger than 2 inches, so if you know an infant with extremely long arms please contact me so I can retrieve my leg!
All this was unfolding as the sun inexorably rose, creating shafts of orange light that pierced through the translucent foggy haze. I had to ditch the leg for now and improvise. “I know…hand hold”, I told myself…however, after snapping several frames and reviewing the images I knew that wouldn’t work…it was too shaky and blurry. “Damn…what now…I’ve got the perfect comp but the shot requires full extension on the legs…what can I use to support the gimped leg”. I searched frantically, grabbing my backpack and putting it under, but it wasn’t high enough. “I need a rock, or something solid and substantial”.  I looked back at the boat…“what about the anchor? But the rope tying it off might be too short. Whatever…let’s try it out”. Holding the anchor in my hand, I slowly saw the slack get tighter as I eased my way up to the shooting site. Without looking back and holding my breathe, I placed it down in the exact position I wanted it to go. I then looked backward and the anchor was a foot away from resembling a tight rope. I rejoiced! Shot saved. This time I carefully extended the other legs and used the cinder block to rest the legs and camera. I began taking photo stacked images.
As the images clicked by, the color of the fog grew more intense, as did the green and orange of the trees and rocks in the scene. Not a single person was awake…no human presence anywhere…the only noise and sights were from the animals of the forest, like the many pileated woodpeckers calling while flying and perched, their voices piercing the silence, along with the loud drumming noises their beak makes when pounding trees. A most serene morning punctuated by the seasonal changes that are slowly but surely coming. 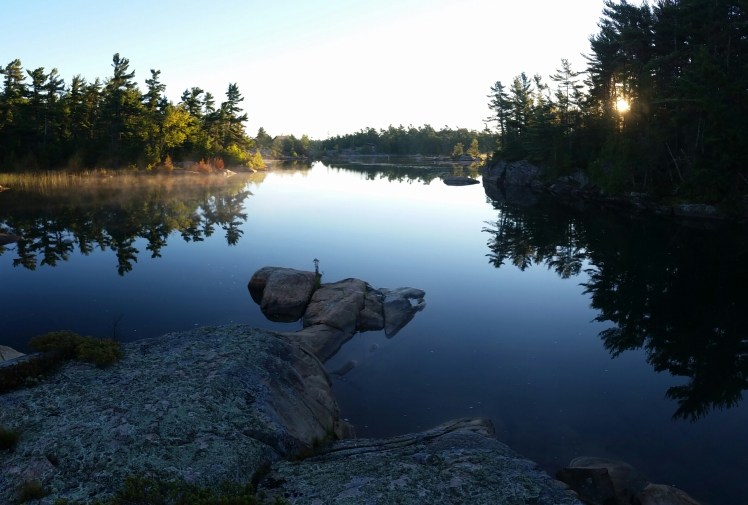